The concept of the EPNS Visiting Teacher initiative:  A volunteer professor / senior/ distinguished member of the EPNS, who is a recognised expert in a certain field, visits a nominated host centre in a country in Europe which is classified by the World Bank per capita income group 1, 2, 3 or 4B for a short stay of intense teaching. Travel and stay will be supported by EPNS.

The EPNS is delighted to announce 3 Visiting Teacher Awards for 2018: 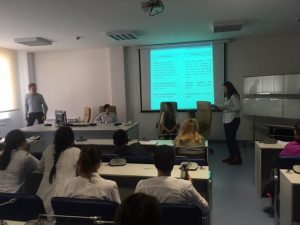 The venue of the seminar was at Astana Children’s hospital N2, pediatric neurology ward. The program of this event consisted of lecturing and discussion of clinical cases.  During these dates were presented information regarding: Genetics general (explaining the basic mechanisms but also explaining things like arrays and exome sequencing), basic classification ( the basic classification of congenital disorders, and why this helps in finding causes of congenital disorders), Intellectual disabilities diagnostics ( how does one go along with a person with intellectual disability when one wants to find the case), behavior ( the importance of genetics for behavior and of behavior in finding causes of congenital anomalies; a separate part was about autism), Epilepsy ( the general principles of genetics in epilepsy, how to act when searching for causes of epilepsy; co-morbidities and epilepsy) also were discussed some possible genetics techniques and achievements in Kazakhstan.  More than 36 participants were attending this seminar. The audience consisted of young doctors, last year students, residents.  We discussed an interesting patients with genetically suspicious for epilepsy, ASD, ID. Some of them already had results of genetical analysis and we tried to make interpretation of them. It was a very exciting event for the specialists in terms of understanding concept of general assessment of children with suspicious for neurological pathology. Also we have met with specialists from genetical labs from Astana who already provided some genetical analysis. They presented some achievements including genetical registry for chromosomal and monogenic pathology.  We do hope that it was a very promising seminar in term of changing view of doctors from different generations on diagnostical and treatment approaches. 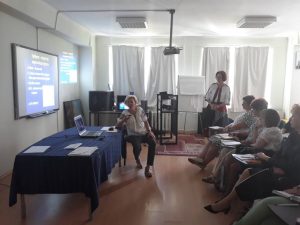 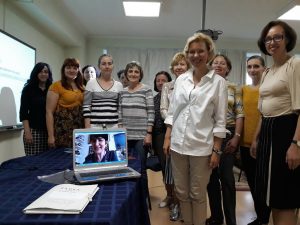 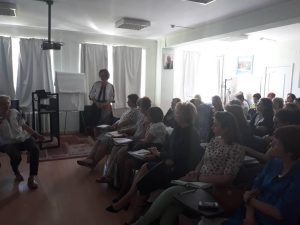 On May 17-18, 2018, within the framework of Visiting Professor option, a Skype conference took place with the participation of Prof. Dana Craiu (Carol Davila University of Medicine, Pediatric Neurology Clinic, Al Obregia Hospital, Bucharest, Romania), Department of Pediatric Neurology and Medical-Social Rehabilitation of the Shupik Natioanl Medical Academy of Post-graduate training, doctors of the Department of Neurology of Paediatric Hospital No1 of c.Kiev. There were 50 attendees in total. Within 2 days, Professor Dana Craiu presented the following papers: New Classification of Epileptic Seizures and Epilepsy, 2017. Treatment of epilepsy. Antiepileptic drugs discontinuation. Epilepsy in girls and women. Epileptic encephalopathy and developmental encephalopathy. Clinical cases were presented and discussed as well. During the lectures, aspects of the practical application of the new classification were considered, approaches to the drug appointment and antiepileptic therapy discontinuation  were discussed, the role of etiology in the concept of epileptic encephalopathy and developmental encephalopathy was considered.Here in Kiev we had very positive feedback about the event. The audience had found the teleconference format quite reasonable alternative to the immediate presence of the lector, but very good internet signal is absolutely necessary. 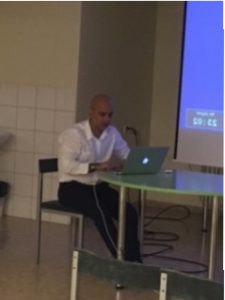 Professor Sameer Zuberi from the United Kingdom visited Estonia in October 2018. The visit was hosted by Dr Inga Talvik,Tallinn Children`S Hospital who reported that the event was a great success.  A teaching seminar  was held with lectures about non-epileptic paroxysmal events. Discussion of patients.